This tutorial is based on Nigel Deakin’s “Announcing Prometheus Metrics from Fn” blog post.

As you make your way through this tutorial, look out for this icon

. Whenever you see it, it’s time for you to perform an action.

Fn server makes metrics available using the API endpoint /metrics by default. Although this endpoint is intended for use only by Prometheus, you can invoke it yourself to see how it works.

Point your browser at http://localhost:8080/metrics. This will display the metrics in Prometheus format.

So far we have seen the raw metrics data generated by Fn server. Now let’s see how to feed this data to Prometheus and then visualize the data using Grafana.

Prometheus is a popular open-source systems monitoring tool. It is a server process which scrapes metrics data from servers and makes it available via a query API. It polls the Fn metrics endpoint at periodic intervals and saves the values of each metric in a database. If you’re running multiple Fn servers you can configure Prometheus to scrape them all in turn and combine the data together.

Prometheus has a powerful API and query syntax which can be used to obtain values of these metrics. You can obtain historical values of a metric, suitable for displaying on a graph, or you can perform statistical operations such as summing metric values across multiple labels, calculating rates and performing quantile functions. Prometheus also has a web interface which allows you to see what metrics are available, and try out ad-hoc queries.

Open a terminal window and navigate to the directory containing this example.

This shows the contents of prometheus.yml file

The last line ` - targets: … ` specifies the host name and port of the Fn server from which metrics will be obtained. The name fnserver used in this example is defined below in the docker command to start Prometheus server. If you are running a cluster of Fn servers then you can specify them all here.

Check the output of the following docker command. This is used in subsequent docker commands to map the docker IP address to the hostnames fnserver and prometheus.

This should show an IP address like the following:

Note: This command uses the parameter --add-host to define a hostname fnserver in the docker container and configure it to use the IP address on which the Fn server is listening.

Go to the Prometheus web console in a browser window:

Open a browser and go to http://localhost:9090/graph

While Prometheus can display tables and graphs of metrics data, it is usually used in conjunction with another popular data visualization tool called Grafana.

Grafana is a popular open source data visualization tool. It is another server process. It has a web interface to create custom dashboards that pull data from Prometheus (using the full power of the Prometheus query API to perform statistical transformations), display multiple metrics using graphical dashboards and can also generate alerts.

Grafana provides powerful and flexible facilities to create graphs of any metric available to Prometheus. This example provides a ready-made dashboard that displays the numbers of functions that are queued, running, completed and failed.

Fn comes with a number of pre-defined dashboards which showcase the various metrics provided by the Fn server.

From the same terminal window and the same directory as above, start Grafana on port 5000:

Go to the Grafana web console in a browser window:

Create a datasource to obtain metrics from Prometheus:

In the form that opens:

Import the dashboard that displays metrics from the Fn server:

You should then see the Fn usage Grafana dashboard showing Function counts: queued, running, completed, failed. Now invoke some function a number of times and see the graphs update. We have provided a sample function in the folder <checked-out-dir>/tutorials/grafana/myfunc.

Now build and deploy the function:

We have provided a simple script file ‘run.bash’ in the folder <checked-out-dir>/tutorials/grafana/myfunc. This script invokes our function 100 times.

Let it run whilst you watch the graphs update. You will see something like this: 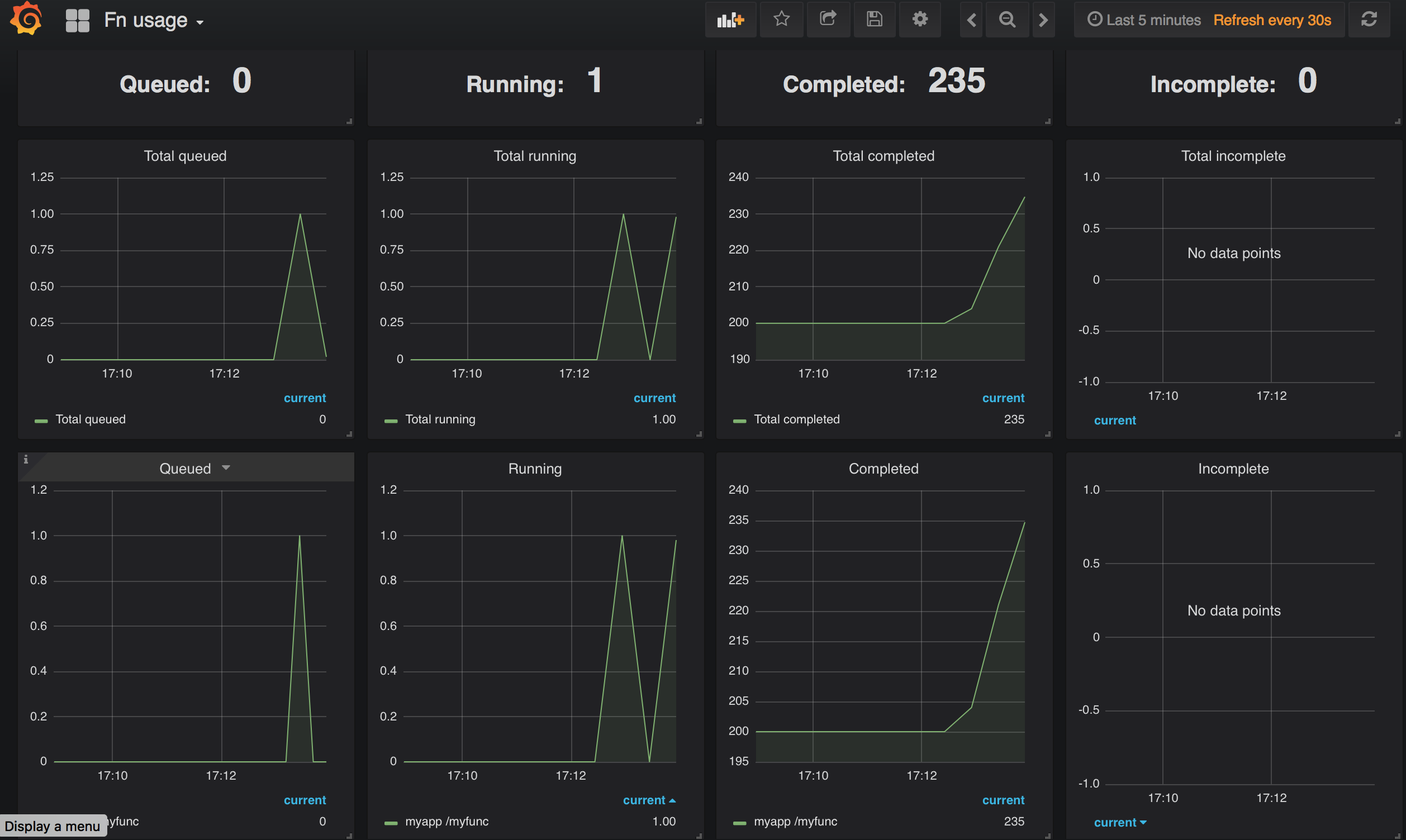 This dashboard shows the four “function count” metrics. From left to right, these are:

For each type of metric, the dashboard displays two separate graphs, one above the other:

This demonstrates how there is more to using Prometheus than simply displaying a metric. It allows you to perform various statistical transformations on the raw data, performing a sum in this case.

Below is a sample Fn usage Grafana Dashboard showing multiple functions over a longer time duration: 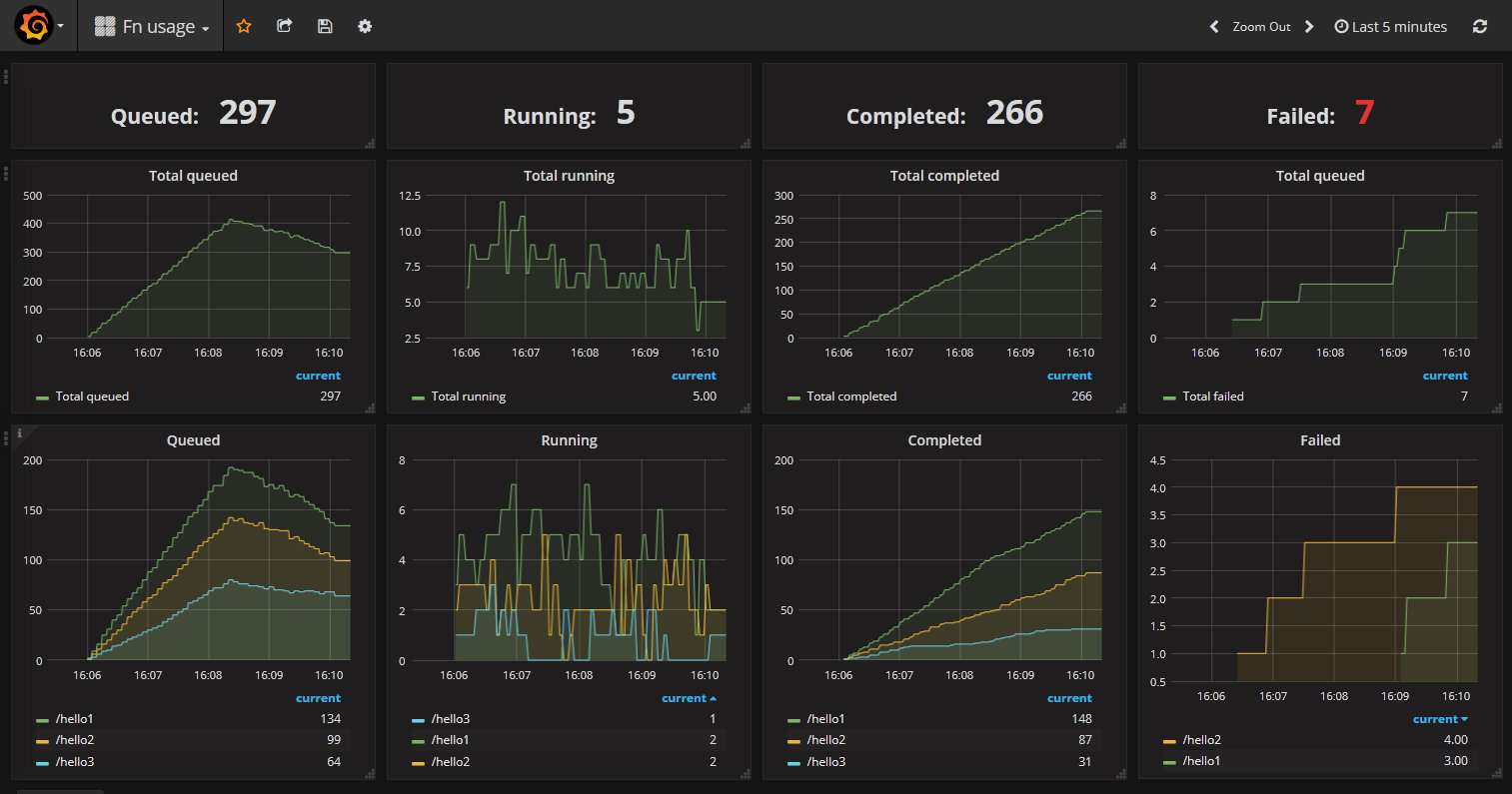 Import this dashboard in Grafana:

You should then see the Fn docker stats Grafana dashboard showing Docker statistics. Once again when you first display this dashboard it will display just one graph. Use the pull-down list at the top to select which particular docker stats metrics you desire.

And you will see the following metrics:

Note: In the Grafana dashboard we strip out the prefix fn_docker_stats from the metric name. This behaviour is defined in the dashboard JSON file.

Now run the script file ‘run.bash’ in the folder <checked-out-dir>/tutorials/grafana/myfunc. This script invokes our function 100 times.

Let it run while you watch the graphs update. All the metrics have the labels fn_path and fn_appname set to the trigger/path and application e.g. /myfunc (myapp) in the legend below each graph. You will see something like the following: 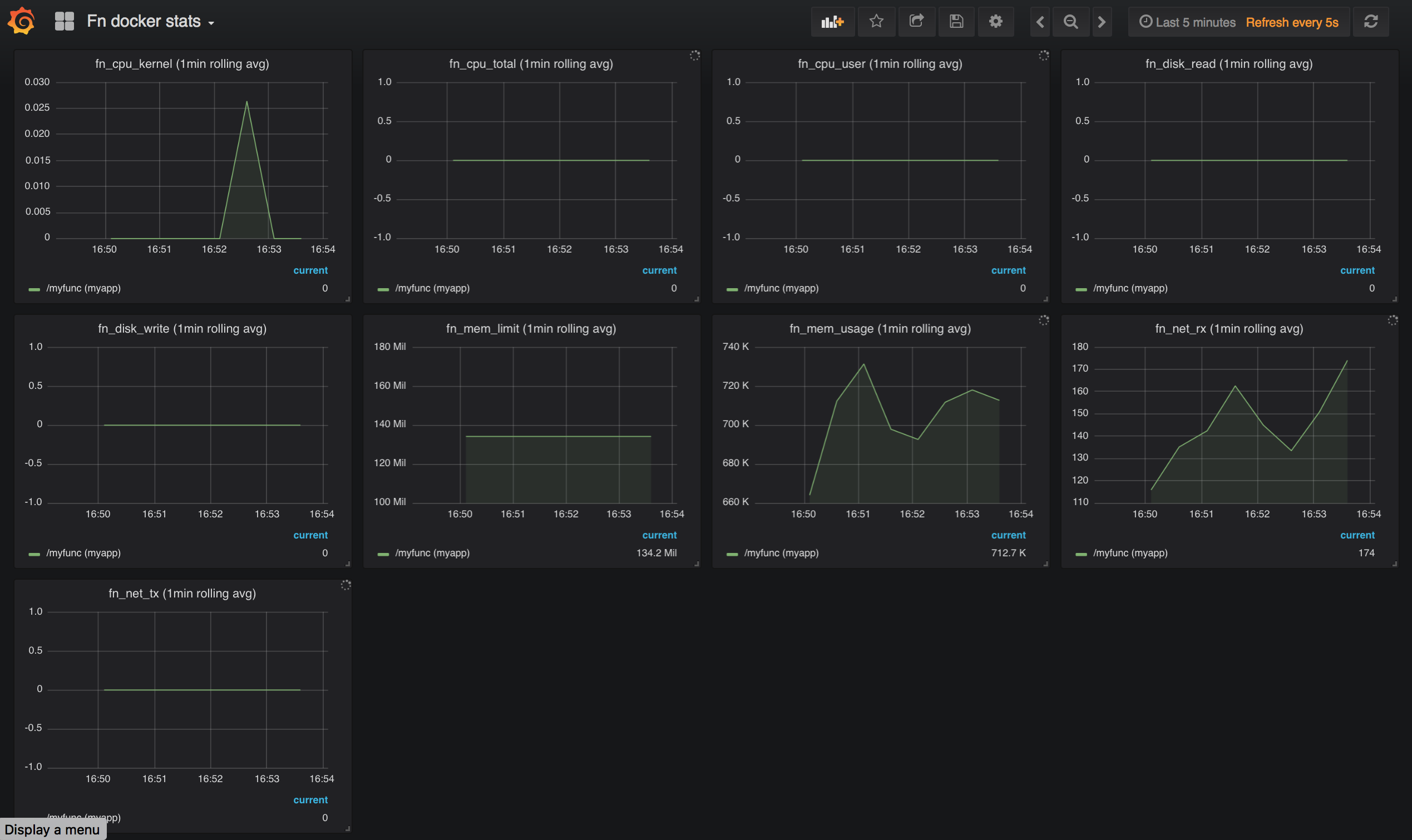 Congratulations! You have a working set up of Fn Grafana dashboards integrated with Prometheus and Fn server metrics. You can leave the setup running and keep checking the dashboards as you work on other tutorials.

Note on this Tutorial

Because of output formatting issues involving Jekyll all instances of double curly braces have been replaced with HTML character entities. (e.g., ‘{{ example }}). The original command is available as an HTML comment immediately after the example in the source for the page.

Go: Back to Contents and proceed to the next tutorial.